"Happy Trails to You"

and other songs of the Old West

Free will offering will be taken

How Sweet the Sound

Riders in the Sky

A Place in the Choir

The Preacher and the Bear

I'll Be There in Glory

We perform in concert regularly. There are two major concerts per season; an annual Christmas concert and an annual spring concert. The choir also performs several times a year in a variety of community settings. The next dates are just around the corner. 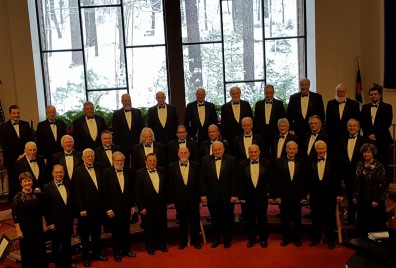 The Grand Rapids Area Male Chorus was organized in 1956 in Grand Rapids, Minnesota under the name, Betty’s Boys. The first director was Betty Kauppi. The group name was soon changed to The Arion Male Chorus, named after the Greek god of poetry and music. In 1966, with the sponsorship of the Blandin Paper Company, the group became known as the Blandin Arion Male Chorus, which was later shortened to The Blandin Male Chorus. This financial support continued for nearly forty years. Due to changes in UPM/Blandin’s donation policies, however, their support for our organization was discontinued and in 2009 the chorus changed its name to the Grand Rapids Area Male Chorus (GRAMC).

GRAMC is non-audition and welcomes men of every age and singing ability. The chorus sings a wide variety of music throughout the year including show tunes, folk songs, classical, spirituals, sacred and humorous selections. Our membership averages 34 and ranges in age from 15 to 83, with some of our members having been in the chorus for over 50 years. The chorus is committed to performing men’s choral music for the enjoyment and benefit of our members and our audience and to encourage a lifetime of singing among men of all ages and backgrounds.

GRAMC has served as an integral component of the local cultural community since its inception. Members practice weekly, September through April, under the direction of Eileen Grosland with accompanist Bonnie Kangas. There are 3 scheduled events every year: a Christmas Concert, our Spring Concert and the Big Sing. We are also a service organization and share our love of music in performances throughout northern Minnesota at numerous fundraisers, scholarship drives, church services, community events and senior living homes.

In 1994 the chorus was inducted into the Minnesota Music Hall of Fame, and in 2016, was a recipient of the Blandin Legacy and Leadership Award. GRAMC is a 501[c] organization.

New members are always welcome and encouraged to experience singing in a male chorus. Practices are Mondays from 7-9 in the Grand Rapids High School Choir Room. For more information, go to gramalechorus.org.

Accompanist, Bonnie Kangas. Bonnie began accompanying choirs while in junior high school, starting with her own junior high school choir and a special cantata directed by GRAMC’s organizer, Betty Kauppi. She is a much sought after accompanist and over the years has played for up to five different school districts and many area churches. Bonnie currently accompanies the Greenway School District choirs and bands.

Musical Director, Eileen Grosland. Eileen has been the musical director of GRAMC since 2010 upon retirement from 32 years in public education. She has taught vocal and instrumental music at all levels, kindergarten through University. Eileen currently teaches private piano and voice lessons, directs a local church choir, acts as a music adjudicator and is actively involved in the arts in the Grand Rapids area. She serves on the board of ICTV, is a member of the Tuesday Summer Concert Series Committee, and Grand Rapids Arts. Her professional affiliations include MMEA, MENC and ACDA.

You can find us here:

Main doors of the Reif Performing Arts Center, thru lobby on the left to the hall to the high school. One of the singers coming in to practice will show you the way to the music room.

Lively practice sessions. If you like to sing, join the chorus. Come to a practice and meet the chorus and director. All singers welcome.

When? Mondays at 7pm. Come thru the main entrance to the Reif Performing Arts Center, thru the lobby on the left to the hallway to the high school.  One of the singers coming to practice will show you the way to the music room.